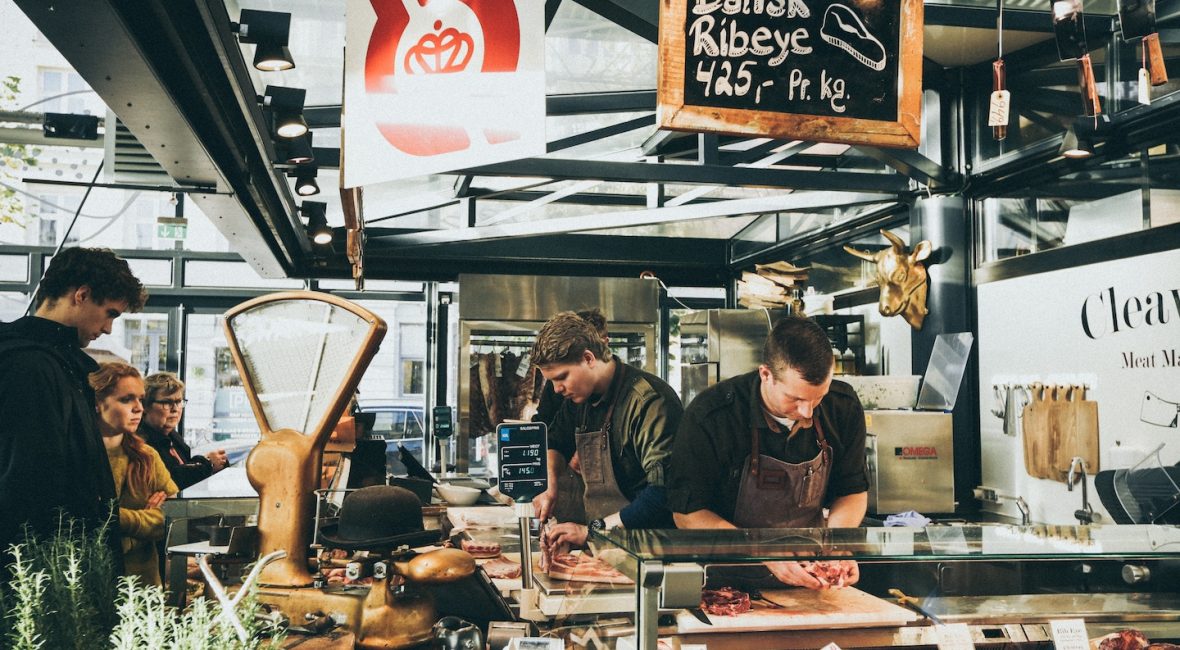 Welcome back to Home Economics for Men, the series that teaches you – the single man of the 21st century – the ins-and-outs of culinary self-sufficiency.

Convenience food burning a hole in your pocket? Are you looking less like Dwayne Johnston and more like Peter Griffin thanks to take-out indulgences? This is the series for you.

As we established last week, there are three main components to a healthy meal; protein, carbohydrates and vegetables. And, plenty of your protein will probably be coming from meat.

But meat buying can be a minefield for the intrepid home economist. It’s expensive, and if you’re not savvy about your purchases, it’s a surefire way to blow your food budget.

So how do you make the most of your money when it comes to buying meat? That’s what today’s lesson is all about. Today, I’ll show you how to master the meat market, shop smart, and buy the tastiest cuts in the process.

When you buy meat that’s been pre-butchered, a lot of what you’re paying is the overhead costs of that butchery. But, when buying a whole animal, you cut out the middleman.

Larger animals – pigs, sheep, cattle etc. – can be purchased as half or quarter carcasses. You can then butcher these into recognizable cuts at home to be frozen for future use.

If you’re at a loss for how to do this, then don’t worry. YouTube is a goldmine for easy-to-follow butchery tutorials that will bring you up to speed in minutes – that’s how I learned how to do it.

This process takes more time than buying pre-processed cuts from the supermarket, but there are definite advantages. First and foremost, you get more meat for your money.

But it’s not just the meat that you’re saving on. Whole animals contain bones and fat, which can be turned into foundational cooking ingredients that tend to be very expensive when bought from a store.

Bones, for example, can be used to make bone broth, a process which is as simple as stockpiling bones, cartilage and any cuts you don’t want to eat in your freezer, and slow cooking a batch of them in water for a day or so. Bone broth comes with its own noted health benefits, and homemade is definitely better than store bought.

You can also render the fat to make your own lard or dripping. While this process is time consuming, it’s passive time that doesn’t require much input from you once the process is started. And, once again, the health and budget benefits speak have been noted.

We’ve been conditioned to believe that so-called middle meats – ribs, centre-cuts, tenderloins, ribeyes, saddle-chops, etc. – are the most flavorful.

“…there is an irony in how meat is priced in this country. You pay more for tenderness, but the more affordable cuts are, more often than not, the more flavorful options. Thus, if you know what to do with a cut, you’ll get more for your dollar while also producing more flavorful meals.”

Tenderloin, according to Danforth, is pound-for-pound the least flavorful cut on the market, despite being them most expensive.

Cheap cuts will take longer to cook, yes. But, when prepared right, the flavor is phenomenal. Plus, as the name suggests, they will save you lots of money.

What are cheap cuts worth looking out for? Here’s a handy guide (via Skint Dad), broken down by animal:

Make friends with your butcher

Picking up meat from the supermarket is easy, sure. But, making friends with your butcher pays off in dividends when it comes to buying quality food on a budget.

Here’s the thing about a good butcher. They’re an expert on meat. They offer the kind of knowledge and experience that a supermarket usually doesn’t.

Butchers can recommend cheap alternative cuts for your meals, they can provide you with specific guidance on cooking meat to maximize its flavor. And, they’re much more likely to reward your repeat, loyal custom than a supermarket is.

Take some time to research butchers in your area. Find a reputable one and start using it. This extra effort will transform the way you think about eating meat.

This might seem like a strange inclusion in this lesson. But, it’s an important statement that needs making.

When it comes to overeating, over portioning meat is where the majority of people fall down. A common dietary problem in American society, overconsumption of meat makes people 20% more likely to develop cancer as well increasing the risk of heart disease.

Not only that, meat is expensive! Even when you’re savvy about the meat market, it’ll still be the biggest dent in your food budget at the week’s end.

So what’s the solution? First and foremost, you need to be aware of portion sizes (see last week’s lesson for more on that). 4 to 6 ounces of meat per plate is plenty for one meal, so avoid cuts that encourage eating more than this.

You also shouldn’t be afraid to factor in some non-meat meals every once in a while. There are plenty of non-meat proteins out there that are still nutritious and will keep your energy levels up throughout the day.

Beans, lentils, tofu and seitan are all worth exploring, and none of them will break the bank (if you want to know more about meat-free alternatives, check out this guide).

That’s it for this week’s edition. By now, you’re a master of meat-buying, know your brisket from your tenderloin and have a solid grasp of other protein sources out there.

But now that you’ve bought those slow-to-cook, but oh-so-tasty cheap joints, what’re you going to do with them? Does this mean hours of your weekend spent by the stove all in the name of saving a few bucks on the weekly shopping bill?

Of course not! In next week’s edition, I’ll introduce you to the single-man’s secret weapon when it comes to hassle-free cuisine; the slow cooker!