Investing in Rare Whisky: Is It Worth It?

The majority of people buying whisky do so because they enjoy the taste. They want to sample different flavors, varieties, or to develop a palate for a good dram.

Increasingly, though, there are those that buy whisky, not for the experience of drinking it, but because they think it can make them rich.

When it comes to buying alcohol as an investment, the first thing you’ll probably think of is fine wine. But, the investment market for whisky is booming to the point that investing in the hard stuff might bring you a better return.

When you read statistics like that, investing in whisky suddenly seems like an attractive option. But, it’s not as simple as buying an old bottling and watching the money roll in.

If you want to see a return on a collectable whisky, there are a few rules to follow. That’s what this article is here for. Today, we’re talking about the fundamentals of investing in whisky; the do’s, the don’ts and the things to look out for when you’re buying.

Why is whisky investment booming?

Today, the market for collectable whiskies is largely being driven by China. It used to be that the Chinese were buying vintage Macallan bottlings as “gifts to facilitate business” (or, what you and I would call “bribes”), but a government crackdown put that practice to bed. These days though, the boom in whisky sales in China is driven by a very different reason. As Martin Green, head of whisky at auction house Bonhams notes:

“Interest in whisky has been growing steadily for many years. One reason is the increasing wealth in the Far East where whisky is seen as a premium product and an indication of taste and sophistication.”

The rise of young High Net Worth Individuals (HNWI), a group of people with $30 million or more in liquid financial assets who are below the age of 30 are also fueling demand for rare whiskies. According to the Jing Daily, interest in whiskey among this population has grown from 15% to 22% in the past three years. According to the Hurun Research Institute’s China HNWI Whiskey Consumption Behavior Report 2017, whiskey is the third most favored alcoholic beverage among Chinese people.

But it isn’t just the Chinese who are consuming whiskies; according to Vijay Sarathi, an analyst at Technavio, who specializes in alcoholic beverages research:

“The demand for premium whiskey is increasing around the world, especially in major markets such as the UK and US. Super-premium whiskies, which are priced above USD 30, recorded close to USD 330 million worth of revenue in 2014, growing by almost 20%. This trend indicates, growth of the premium whiskey segment will significantly increase revenues for the overall market through 2020.”

What to look for in an investment-grade whisky

If you’re buying whisky as an investment, there three things to consider when picking out a bottle:

This one seems entirely obvious, but the rarer a whisky it is, the more collectable it will likely be. Limited runs that are in short supply or limited editions from established makers tend to be popular. Then there are bottles from so-called “silent distilleries” (distilleries that have closed down). Port Ellen in Islay, for example, shut down in 1983. Diageo, the drink conglomerate that owned it, has trickled remaining Port Ellen product on to the market every year for the past 17 years. Their 2016 offering was $3,400 a bottle. 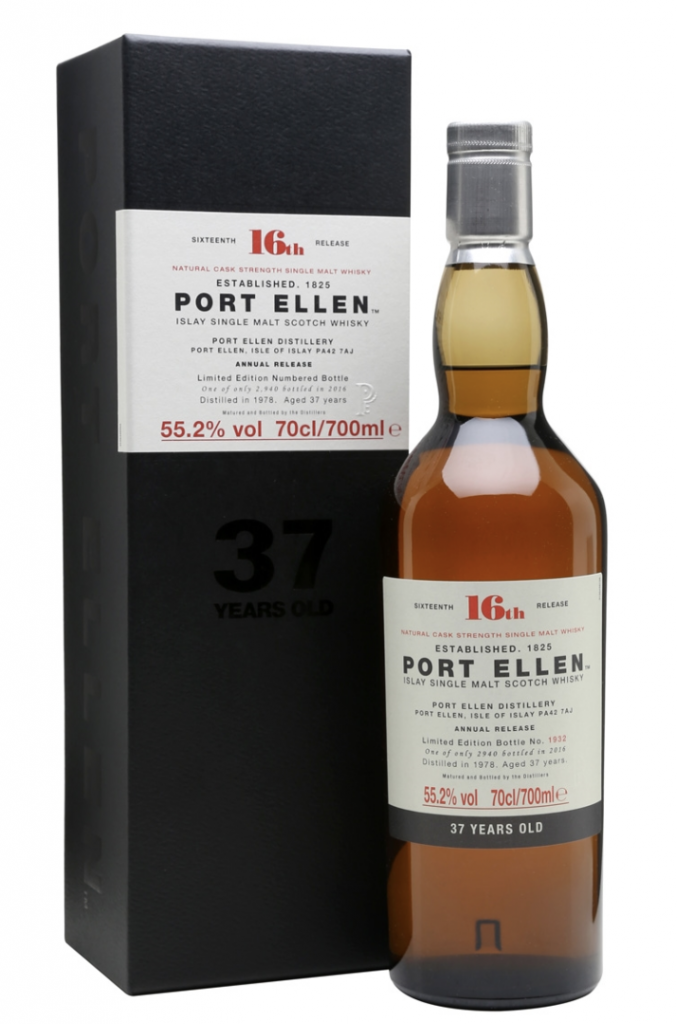 Photo from The Whisky Exchange

When buying a rare bottle of whisky, you have to weigh that rarity up against the recognition of the brand. As Scotsman Food and Drink notes,

“favoring an official bottle brings better value to the resale than an independent bottle, even when they have identical properties – same brand, same year of distillation.”

“Much of the demand is driven by how good the whisky is; it’s not about packaging or rarity.”

Which is to say, just because a whisky is a collector-aimed, limited edition, doesn’t mean it’ll keep its value. There’s a reason 1980s bottles of 12-year-old Talisker only sell for just over $1000.

If you read our Scotch 101 series, you’re probably familiar with names like Macallan, Ardbeg, Bowmore, Highland Park, The Balvenie or Glenmorangie. And guess what? It’s bottling from those established brands that tend to sell consistently at auction.

Remember that vertical of 18-year-old Macallan we mentioned at the beginning? Part of the reason it sold so well is that collectible ranges of whiskies are big business with whisky investors. Distilleries deliberately release series of special editions that, across the years, form a collection, and owning a full run of one of those series increases the value of the bottles exponentially.

Where do you buy whisky for investment?

If you’re looking to buy an investment grade whisky, you’ve got three options. The first is going to a whisky auction. This is where the majority of investment grade whisky ends up. But, buying at auction presents some challenges. Auctioneers may charge up to 25 per cent of the value of whiskies in order to sell them, while there are also transportation and storage costs to factor in.

Buying direct is another route, though one also has to factor in that returns can vary greatly due to the high transaction costs involved in buying and selling.

Finally, there’s the option of investing online, which has gained some traction in recent times. Using this approach, investors buy and sell whisky at wholesale prices for as little as $3 a liter using platforms like WhiskyInvestDirect.

Things to watch out for

As when investing in any collectable, the aspiring whisky investor needs to look out for forgeries. There are people out there trying to sell forged whisky bottles. Some are fairly obvious to spot – they might claim to be from a year when the distiller didn’t make whisky, for example – but others are tricky. Always do plenty of research when buying a bottle – Catawiki and Rare Whisky 101 are useful resources – and, if you get an offer that seems to good to be true, it probably is.

And of course, it goes without saying that buying an opened bottle of collectable whisky is a definite no-no. The instant that seal is broken, the value of that drink plummets and an opened whisky is essentially a non-investment. (If you want to know why, check out our guide to storing whisky). 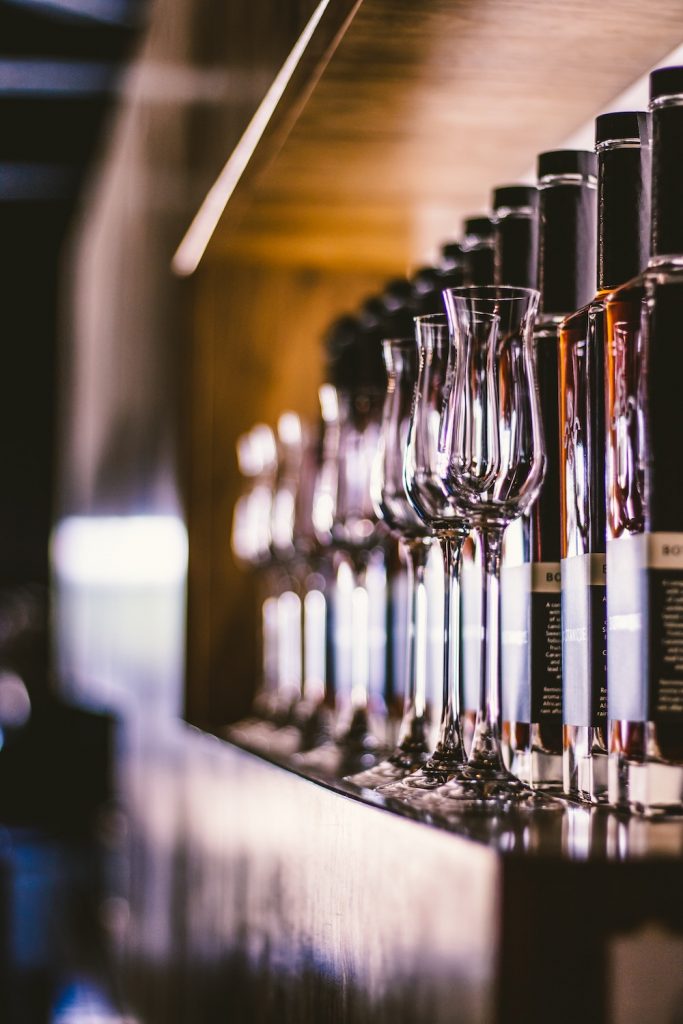 Photo by Louis Smit on Unsplash

Investing in whisky might seem appealing, given the returns that you can potentially make, but it’s a challenging business and there are lots of variables that will determine your success. As Patrick Connolly (speaking to the Financial Times), adviser at Chase de Vere, puts it:

“Remember that whisky doesn’t produce any earnings or income and so price fluctuations are based solely on supply and demand. This means there can be some big upward or downward price movements if there are changes in the economic environment or as it comes in or out of favor.”

If investing is too risky for your palate, I would recommend becoming a collector. If all goes wrong and you can’t sell your whisky, at least you’ve got a spectacular drink to show and an excuse to find some good friends over for a great time!